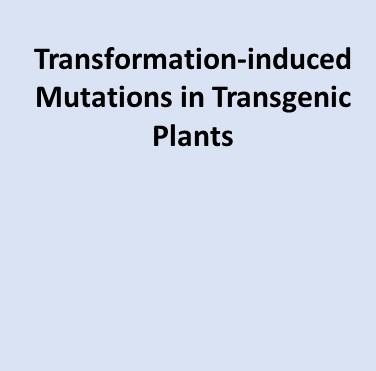 Plant transformation has become an essential tool for plant molecular biologists and, almost simultaneously, transgenic plants have become a major focus of many plant breeding programs. The first transgenic cultivar arrived on the market approximately 15 years ago, and some countries have since commercially approved or deregulated (e.g. the United States) various commodity crops with the result that certain transgenic crop plants, such as herbicide resistant canola and soya and pest resistant maize, are currently grown on millions of acres.

Advocates for the use of genetic engineering as a plant breeding tool claim its precision provides a major advantage over other plant breeding techniques. The presumption is that genetic engineering results in (1) only specific and known genotypic changes to the engineered plant (the simple insertion of a defined DNA sequence - the transgene) and (2) only known and specific phenotypic changes [the intended trait(s) encoded by the transgene]. This presumption has strongly influenced biosafety regulation. Regulators typically assume that the plant transformation methods used to introduce a transgene into the plant genome are mostly irrelevant to the risk assessment process and that the major source of risk in transgenic crop plants arises from the transgene itself. The focus of this review is a scientific assessment of the precision of current crop plant transformation techniques.

If plant transformation were precise, 20 transgenic plants, derived from the same parent plant material and carrying the same transgene, would be identical in phenotype. Furthermore, they would be identical to the non-transgenic parent plant, except for the transgenic trait. This, however, is usually not found in practice. Phenotypic variation is the norm within populations of plants from the same experiment (Hoekema et al., 1989; Conner et al., 1994; Bregitzer et al., 1998; Singh et al., 1998; Kaniewski and Thomas, 1999; Shu et al., 2002) and breeders and researchers must carefully screen numerous transformed plants to obtain one or a few plants which exhibit only the desired traits (Kumar et al., 1998; Dear et al., 2003). Despite this, even plants originally selected as having the appropriate phenotype are often found, during later experiments or commercial use, to have unexpected and unintended traits (Kuiper et al., 2001; Haslberger, 2003).

One possible cause of unintended phenotypes in transgenic plants is the presence of transformation-induced mutations. The insertion of a transgene into the plant genome inevitably disrupts the sequence of the endogenous plant DNA and may be accompanied by other mutations. A transgene insertion event, as defined here, includes both the desired transgene and any associated insertion-site mutations. In this review we define transformation-induced mutations as: (1) the disruption of plant genomic DNA caused by transgene or superfluous DNA insertion (2) any alterations to plant genomic DNA, including base pair changes, duplications, deletions or rearrangements, caused by the mechanism of transgene insertion or by other aspects of the plant transformation process (such as tissue culture or antibiotic use) and (3) the presence of superfluous DNA (any non-genomic DNA other than a single intact copy of the desired transgene)(reviewed in Smith et al., 2001).

In this paper we review what is known about the effect of the plant transformation process on the plant genome. We analyse the extent and frequency of transformation-induced mutations in transgenic plants created by Agrobacterium-mediated transformation and particle bombardment. We discuss the potential of such mutations to result in unintended harmful phenotypes and the biosafety and regulatory implications of these findings. We also offer recommendations to researchers and regulators which, if followed, would help prevent or eliminate transformation-induced mutations in transgenic plants. In this review we do not discuss the potential for the transgene itself to result in unintended phenotypic consequences.

To facilitate discussion, we have divided transformation-induced mutations into insertion-site mutations (those created at the site of transgene insertion, which are thus an integral component of the 'insertion event') and genome-wide mutations, those present at other random locations in the plant genome, but which may nevertheless be retained in transgenic cultivars.