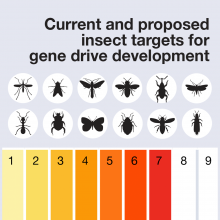 Introduction
The emergence of gene drive technology opens-up unprecedented prospects of modifying, suppressing, or even eliminating wild species to serve human purposes. The consequences of choosing to go down this path are very difficult to foresee, especially in the longer term. To help frame further discussion on this topic, we have conducted a survey of gene drive development in insects, screening the the scientific literature up until April 2022. The survey also includes development of so-called ‘x-shredders’, a sex ratio distortion system with close similarities to gene drive technology.
We do not cover issues regarding risks, difficulties in performing robust risk assessments, or the lack of proven methods to confine, halt or reverse engineered gene drives.

Our survey gives an overview of:

1  Many experimental gene drive systems are being developed and tested in the model organism Drosophila melanogaster. Because we are not aware of any plans to target this organism in the wild, a survey of work in this species is not included here but rather will be presented in a separate table.
2  The vast majority of the targets identified in the literature are single species or species complexes, however some early stage proposals relate to broader taxonomic groups, namely the Glossina genus (Testse flies - row 31), the Scolytinae subfamily (Bark beetles - row 44) and the Thysanoptera order (Thrips - row 51).