African Agricultural Growth Corridors and the New Alliance for Food Security and Nutrition: Who benefits, who loses? 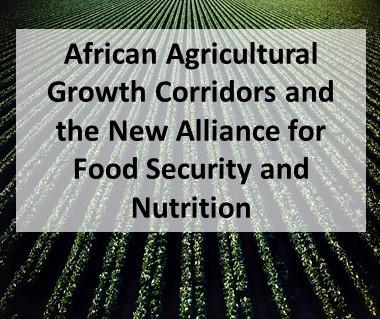 This brief report looks at how governments, international finance institutions and global corporations are collaborating in major new projects in Africa (currently in Mozambique and Tanzania) to reorder land and water use and create industrial infrastructure over millions of hectares in order to ensure sustained supplies of commodities and profits for markets. The Corridors concept first emerged at the World Economic Forum and a number of major corporations are involved. African Agricultural Growth Corridors are described as development opportunities, especially for small farmers, but are likely to be most advantageous to corporations and client governments. They have the backing of international institutions including the World Economic Forum, the G8 and G20 groups of the major global economies, the Food and Agriculture Organisation and the World Bank. More recently many of the same players have come together to create the New Alliance for Food Security and Nutrition, which promises to reinforce and extend the Corridor concept. The report is divided into three parts, 1) an introduction to the Corridors and the New Alliance and who is behind them, 2) the corridors themselves, and 3) the potential impacts.